Cardinals hold off Mustangs for the 28-7 win 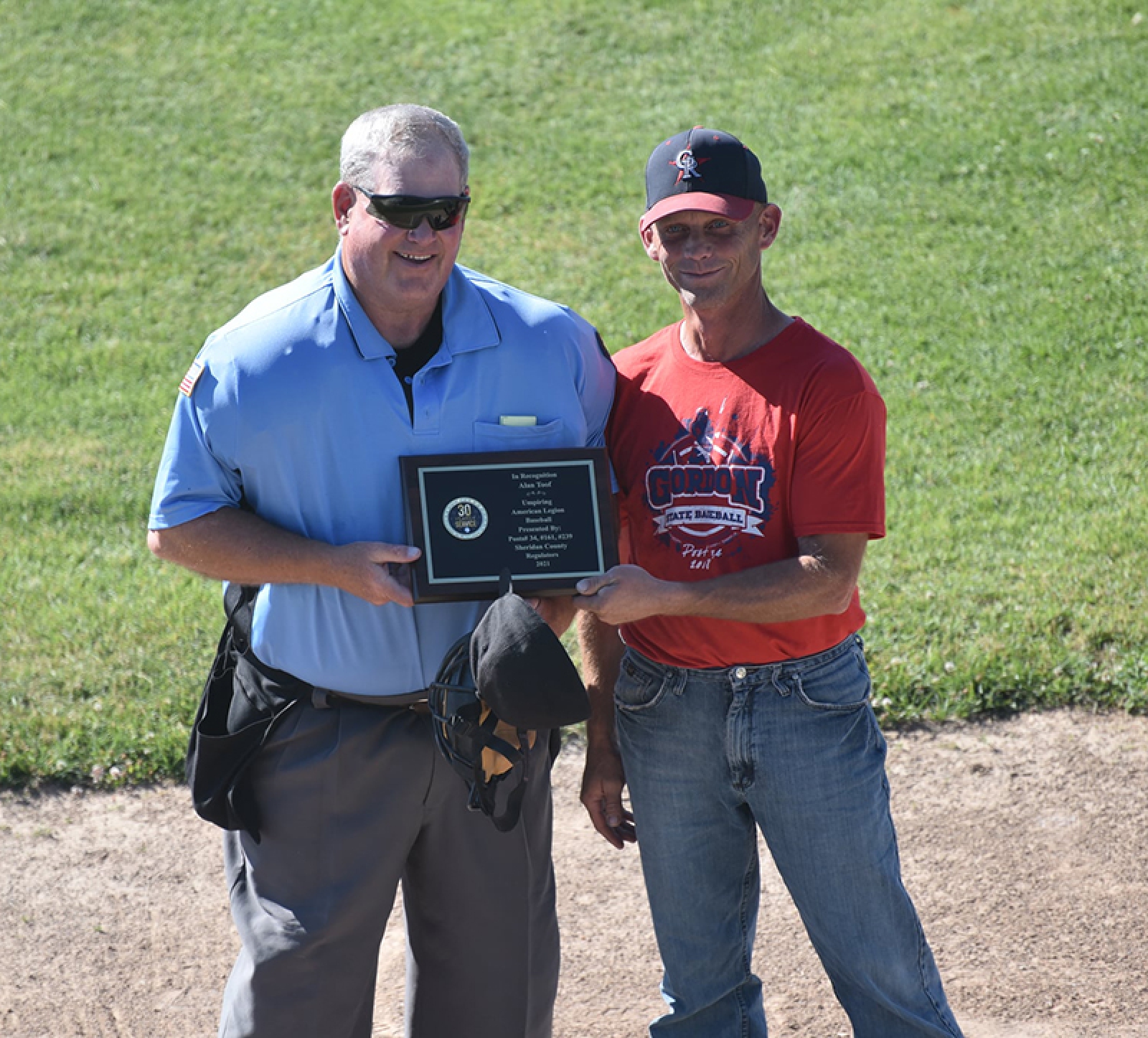 If you have ventured out to a ballpark to watch baseball in Sheridan County over the last 30 years, chances are you have seen Alan Toof doing what he loves; umpiring America’s Pastime.

Toof, a 1978 Hay Springs High School graduate who now resides in Chadron, has been a staple at ballparks all throughout the Panhandle since 1991. This includes Kiwanis Field in Gordon and the Historic Modisett Ballpark in Rushville.

Before a game held at Modisett Ballpark on Tuesday, June 22, the Sheridan County Regulator Baseball Program presented Toof with a plaque recognizing his 30 years of commitment to umpiring local youth sports.

“I was very surprised by the award. I had no idea it was coming,” said Toof.

“I thought the speech before the game was very good but I kept wondering, where are we going with this? And then he said something about 30 years, I thought, oh man he’s talking about me,” Toof added with a chuckle.

His umpiring roots started from humble beginnings. The 30 years began when Toof and Roy Fitzgibbons needed umpires for their 10 year old softball games in Chadron. So the pair switched off, helping each other out. And then Chadron Legion Coach Bruce Parrish told Toof he needed him on the big field.

Toof’s first taste of Legion baseball will be one he will never forget.

In a tense match-up between McCook and Chadron, the McCook pitcher hit a Chadron batter in the head. The Chadron batter took one look at Toof behind the plate and made a dash for the mound. In a blink of an eye, it was a full blown brawl.

After the dramatics of his first game, Toof began to amass the experience and confidence he needed for his decorated career.

He has been on the field for all levels of baseball and softball, helping out wherever he has been needed.

His list of accomplishments include dozens of Legion Area Tournaments but also getting the call for 3 Legion State Tournaments.

But for Toof, its not about the games and accolades but the relationships that have been formed through the love of the sport.

“The people that I have met and the friendships I’ve made all over Nebraska, Wyoming and South Dakota has been my favorite part,” said Toof.

“You might not talk to them for a year or two but whenever I get back to the area, the relationship is still there,” he added.”

Being behind the plate as an umpire is a thankless job; whether it’s heckling coming from the stands or the foul tips that always seem to miss the padding; Toof is unsure how many more years he will be able to dedicate to the craft. So now his focus turns to the younger generation and getting them involved in his passion.

Toof has been hosting umpiring clinics over the past few years to provide training and experience for young men and women interested in umpiring. Toof has two graduates from his youth umpiring clinics now who are umping in legion baseball this season.

“That is what is more fulfilling for me now, getting the younger guys involved and see how much fun it really is for them,” he added.

Alan has been working for SWANN for 27 years, with his 28 year anniversary coming up in August of this year. He operates his blue SWANN truck Monday-Friday, picking up the trash and yard waste in Gordon, Rushville, and Hay Springs. So even though Toof now resides a county over, his roots in Sheridan County are never wavering. And that is something he is truly grateful for, especially after the recognition he received.

“It was really cool that somebody from Sheridan County, where I grew up, thought well enough of me to do something like that for me.”

More in this category: « Misner sentenced to 45 days in jail; $15,000+ in restitution Summer fun in Gordon; Wayland Park Disc Golf Course provides fun and exercise for all ages »