Sidetracks opens for business in Gordon 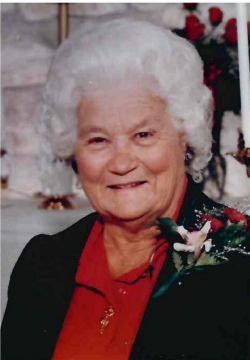 Beatrice Pauline (Riley) Junge passed away with family by her side at Gordon Memorial Hospital September 24, 2020.

Bea was born at a family home in Sheridan County on December 6, 1929, to Cletus and Pauline Riley. Two years later her brother Daniel was born, and the family lived by Beaver Valley Wall located north of Hay Springs, Neb.

She met the love of her life, William (Bill) Junge and was married on December 5, 1946; adding to this union was six boys and a girl. Her family was her biggest joy, as she carried a book of photos to show off her babies to everyone. Bea loved when family came to visit and she got to hug and kiss her babies, even the adult ones.

They worked for Frank DeHaven until 1961, when Bill and Bea moved to a farm south of Clinton, Neb., and to this date is their home.

Bea was well known for the delicious food that she prepared while being a member of the Rushville Legion Auxiliary, occasionally cook for Clinton School, and all the home and neighborhood brandings. She was proud of her beautiful flower beds, rose bushes, and gardens. Rarely did she sit still, but to relax she would enjoy doing crossword puzzles (always using an ink pen).

As a farmer’s wife, Bea could run a tractor to rake hay or plow a field, and ride a 4-wheeler to move cows. Bill and Bea ran their farm in unison as an amazing couple of 73 years 9 months of marriage.

Mom always said, “I have so much to be thankful for, my life was good.”

A Memorial has been established for the Rushville American Legion Auxiliary, and donations may be sent in care of Chamberlain-Pier Funeral Home, PO Box 366, Gordon, NE 69343.