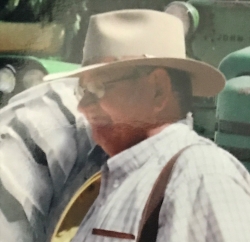 Harold was born March 21, 1940, to Chriss and Mary Jane Obermiller in his Grandpa Stern’s house in Rushville, Nebraska.  Chriss and his family worked for several sandhill ranches over the years. In 1942 the family moved back to Rushville. In 1943, they moved south of Clinton, and Harold started school in 1945 attending the Cunningham Country School. The family than moved west of Clinton where Harold attended the Clinton Elementary School. In 1947 they moved north of Clinton to a farm and started working for Ed Holstein. Life was busy growing corn, wheat, and running cows. When Harold was 11 years old, he got a three-year-old gelding. His sister and he would ride the horse double to the Milan Country School. (Later, his daughters would also ride horses to Milan school.) Harold always had a love for horses.

In 1950, Harold started 4-H. Over the years he showed horses, pigs, steers, and sheep. Some of his favorite memories were showing steers at the Nebraska State Fair, Denver Stock Show and at Aksarben. He would put his steers on the train and would ride down with them to Omaha. Harold also competed at the Nebraska State Grain Judging contest where his team won 2nd overall. In 1959, Harold was crowned 4-H King in Sheridan County. (His sister Lila was a 4-H Queen, and all three of his daughters were 4-H Queens in Sheridan County.)

Harold attended Rushville High School and graduated in 1957. After high school he worked on several ranches in the sandhills. From 1961 to 1964 Harold served his country where he was enlisted in the US Army. The majority of his service time was spent in Hawaii. In 1964 Harold returned to Rushville where he worked for his dad and the Rushville Sale Barn.

Harold married Norma Moore on October 1, 1967, and to this union three daughters were born, Tammy, Vickie and Tina. Harold continued helping his dad on the farm, hauling hay for the Rushville Sale barn, breaking a few horses and in the winters he would work for Scott Manufacturing of Clinton. In 1974, Chriss and Mary Jane retired, and Harold and Norma took over the operation.

Harold taught his three daughters how to work hard. Whether it was milking cows, helping in the hay field, riding horses to work cattle, or working with their 4-H projects. Harold helped the girls start a small flock of Suffolk sheep, traveling with them around the country to purchase rams. He loved going to the County Fair every year and his daughters were also able to show at the Nebraska State Fair. Most of the time, Harold was too busy in the summer on the farm to attend a lot of the 4-H events but was always excited to hear about the outcome from his girls in the evening.

In 1986, Harold and Norma sold their cows. They then bought a house and small acreage just northwest of Rushville. Harold worked for Wellnitz Ag Repair, as well as Farmers Coop delivering propane and diesel around the area where he enjoyed visiting with everyone. He drove truck for the Sheridan County Road Department and later became the ranch manager for Clay Creek and LK Ranches. In 2015, Harold retired, and as a thank you from Bob Bently and Roger Donley, they sent Harold and Norma on an Alaska Cruise. Having never travel much past Nebraska’s borders, it was a trip of a lifetime!

Harold belonged to the Rushville American Legion Club and volunteered several years serving on the honor guard. He loved collecting old tractors and belonging to the Hwy 20 Tractor club. Harold enjoyed helping work the gate for several years at PQHA Open horse shows, where he watched his grandkids show horses. He was a member of the American Gebvieh Association and kept a few cows with Ken and Tammy. He would help out on the ranch, moving cows, raking hay, and branding calves. Harold enjoyed plain black coffee while visiting with family, friends and neighbors. He will be missed by all.

A celebration of life will be held Monday, September 27th at 10:00 am, at the American Legion Club in Rushville, Nebraska. Burial will be at the Rushville Cemetery.