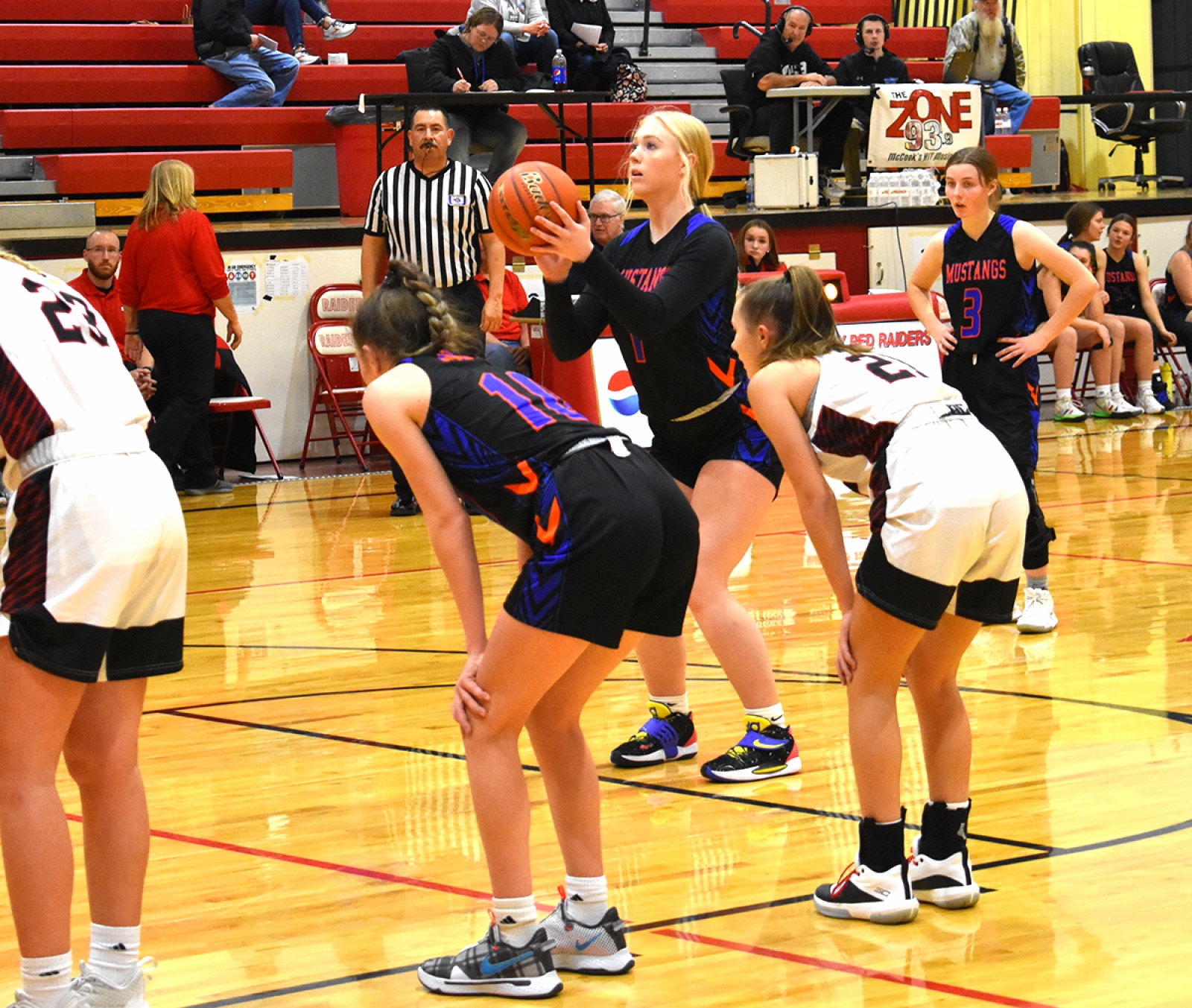 The Mustangs Girls Basketball team made their annual trip to Sidney, Nebraska to take part in the Holiday Shootout hosted by Sidney High School.

The first game of the tourney pitted the Mustangs against the 6-2 Chase County Longhorns.

The Mustangs began the game ice cold, only managing 2 points in the first quarter.

The Longhorns took advantage and pushed out to a 26-15 lead at halftime and never looked back. The final score was tilted towards Chase County, 52-30.

Junior Tessa Hurlburt was the only bright spot for the Mustangs on offense, scoring 16 points and making 4 three-pointers in the loss.

The loss dropped the Mustangs into a match-up with the Class B McCook Bison.

Three Mustangs broke through in this one, with three players finding double digits in the scoring column.

Hurlburt continued her hot tournament with another 14 points. She was backed up by junior AJae McKimmey and sophomore McKinley Grover with 11 and 12 points respectively.

The trio of scorers helped sneak the Mustangs by the Bison, 53-49.

“She (Hurlburt) really got more aggressive on offense,” he added.

With the win in their back pocket, the Mustangs turned their focus to their final game of the tourney against the Mitchell Tigers.

This was the third game in as many days for both teams and they grinded this one out.

The Tigers held a 2 point lead late in the fourth quarter but sophomore Haley Johnson was fouled and went to the line with a chance to tie it up. Johnson made both free throws, coming through in the clutch to tie the game up and push it into overtime.

The Mustangs took advantage of the extra time and were able to pull ahead for good over the Tigers, 49-43.

They finished the tournament with a 2-1 record and pushed their overall record to 6-3.

“The girls worked very hard and played well as a team in the tournament,” said Coach Hurlburt.

“They saw some tough man defense and handled it well,” he added.

Up next for the Mustangs will be a home match-up with the Cowgirls from Cody-Kilgore. That game is scheduled for Tuesday, January 4 beginning at 5 p.m.

The team will follow that up with two road games to close out the week. The first will be a trip to Valentine on Friday, January 7 followed by a trip to Bayard on Saturday, January 8.