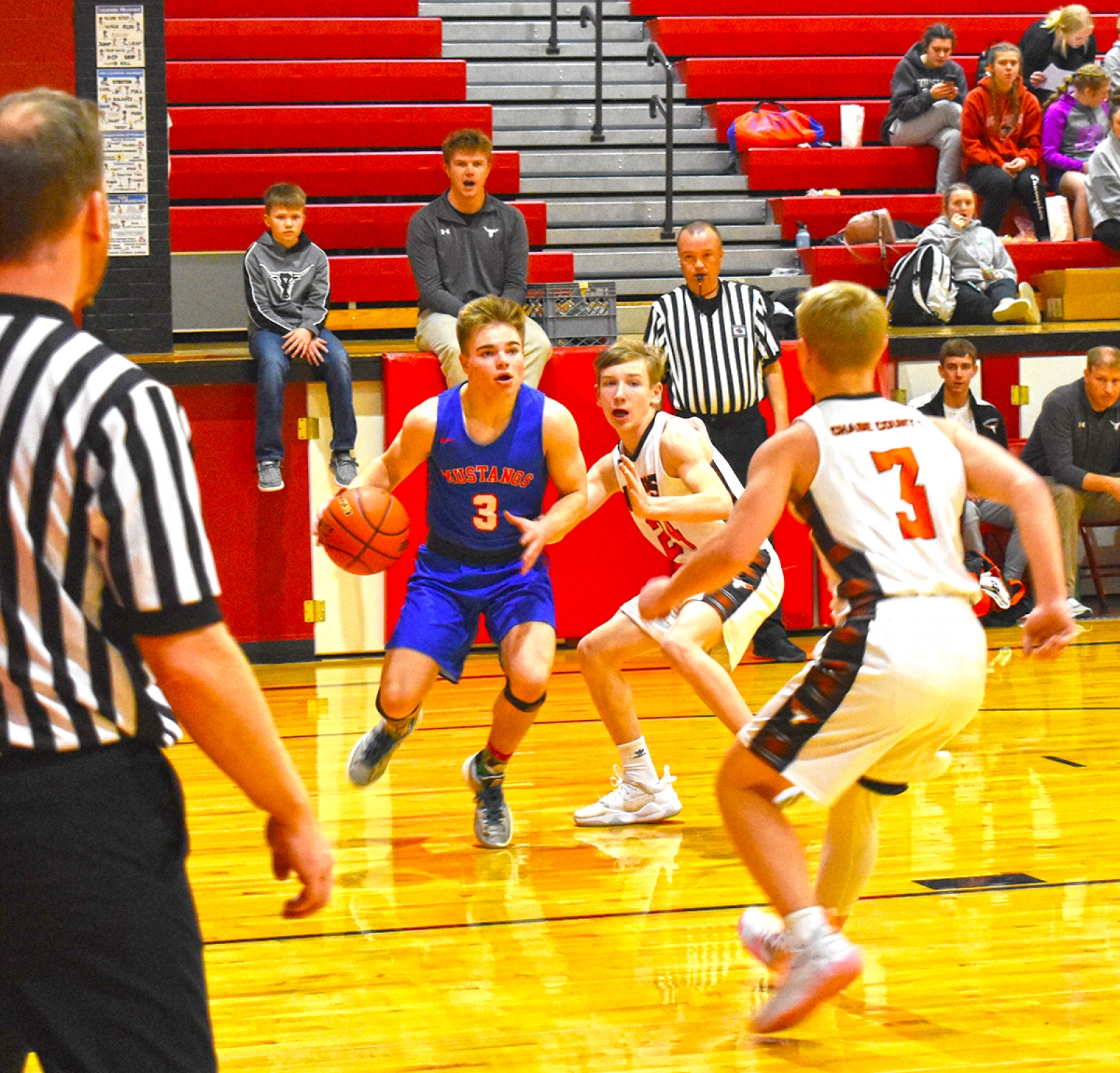 The annual trip to the Sidney Holiday Tournament was on tap for the Mustangs over their Holiday Break.

The first game of the tourney was a match-up with the Chase County Longhorns on Monday, December 26.

The Mustangs started fast scoring 22 and 19 points in the first and second quarter to jump out to the quick 41-23 halftime lead.

The Mustangs would lean on this lead all the way to the final horn, winning the game 65-40.

Junior Carter Anderson led the scoring, dropping in 19 points. Anderson did some damage from behind the arc, draining 3 shots from downtown en route to his 19 points.

Fellow junior Jace Nelson was right behind him with 17 points in the win.

The win over the Longhorns sent the Mustangs into a winners bracket match-up with the Class B McCook Bison the next day.

The Mustangs continued their hot play, pushing ahead by 14 points heading into the fourth quarter.

The Bison did not quit though, erasing that lead and tying the game late in the fourth quarter.

A Bison player was fouled and headed to the free throw line with just over 5 seconds left on the clock.

The first free throw was good, giving the Bison the lead, 48-47. The second attempt was off the mark and the Mustangs charged down the floor

The ball ended up in junior Ellis Livingston’s hands and he streaked towards the basket for a last second shot.

Livingston’s shot attempt kissed off the glass and went in, giving the Mustangs a dramatic 49-48 win over the Bison.

“What a great moment for Ellis (Livingston) and the team,” said Head Coach Joel Nelson about the shot.

“We executed a play that we had worked on in practice and Ellis (Livingston) gets the game winning lay up,” he added.

The buzzer beater by Livingston propelled the Mustangs into the Championship against the host school, the Sidney Raiders. The Class B Raiders brought a 8-1 record into the match-up, with the Mustangs still unbeaten at 8-0.

The Raiders and Mustangs kept it tight in the first quarter, ending it at 10 points a piece.

Sidney would take advantage of some uncharacteristic turnovers by the Mustangs and pull ahead 38-29 at the end of the third quarter.

The Mustangs pushed hard in the fourth, outscoring the Raiders 16-13, but ultimately fell short, 51-46.

The loss to Sidney marked the first one for the Mustangs in the 21-22 season, placing them firmly at 8-1.

Nelson led the offensive charge for the team, dropping in 11 points. Nelson also grabbed a team high 12 rebounds in the loss.

“The tournament was a great experience for our team. We saw some quality opponents and proved that we could play with them,” said Coach Nelson.

“We also learned a lot about our team and saw some things that we need to work on to continue our growth as a team,” he added.

Anderson and Nelson were both placed on the All-Tournament Team for their efforts in the Mustang’s second place finish.

Anderson totaled a team high 43 points in the three games. He also had 10 assists and 9 steals during the tournament.

Nelson was also very strong for G-R, scoring 41 points in the tournament. Nelson was the leading rebounder for the Mustangs, pulling down 31 in the three contests.

The Mustangs now look to a pair of games coming up this week. Cody-Kilgore comes to town on Tuesday, January 4 for a home game with the Mustangs.

The team will then head down the road on Saturday, January 8 for a road showdown with the Bayard Tigers.

The Mustangs currently sit at 8-1 overall on the season.